More than just a piece of land with facilities and runways for air transport takeoff and landing, an airport is the intercontinental connectivity point of a country. Airports are of great importance because they allow the flow of both passengers and merchandise between different countries and continents, which positively affects tourism and trade in a country, supporting economic competitiveness and social inclusion in globalization. Mexico has 45 international airports that allow the controlled flow of passengers and merchandise by the authorities, however, approximately 71% of all air operations are centered in 5 airports: Mexico City, Cancun, Guadalajara, Tijuana, and Monterrey.

As part of the proposals in the presidential campaigns, the current president of Mexico, Andrés Manuel López Obrador, proposes to convert the Santa Lucía military base located in the State of Mexico into an international airport, due to the demand and large flow of air operations at the Mexico City International Airport (AICM). The construction of the new airport (AIFA) formally began in October 2019 and the first phase of the airport started operations in March of this year. Both the AIFA and the Toluca International Airport (AIT) have made it possible to reduce traffic and air operations at the AICM thanks to the close distance that separates them, making our country more attractive for investment. In May 2022 the Undersecretary of Transportation, Rogelio Jimenez, announced in a meeting that 25% of the air operations that are carried out at AICM will be moved to AIFA and AIT, a mission that must be accomplished within the next 12 months in progress. Jimenez mentions that the main objective of this is: “The project of the entire metropolitan scale is that we return to the original plan of long ago, that we have the flights of the entire mass of the metropolis distributed in five airports: AIFA, AICM, Puebla, Cuernavaca and Toluca.” (Jimenez, 2022, para.5)

In 2021, the AICM was the airport in Mexico with the highest volume of passenger traffic, with a total of more than 36 million passengers to and from more than 100 destinations on 3 continents; and so far in 2022, this airport has exceeded the transfer of more than 100 thousand passengers on an average day. Most of the flights registered are domestic and according to La Jornada records, on a weekend with holidays, there are approximately 1,000 daily take-off and landing operations at the AICM. The following table shows data provided by the AICM on the number of passengers arriving and departing from the airport per month.

Regarding cargo flights, last May 10 the Ministry of the Interior and the Ministry of Infrastructure, Communications and Transportation informed that all charter and cargo flights must move their operations from the AICM to the AIFA; since in the first four months of 2021, airlines operating at the AICM moved 29,496. 3 tons of domestic cargo and 150,879.6 tons of international cargo, giving a total of 180,375.9 tons of cargo in the first four months of 2021, this figure represents an increase of 17.9% compared to the same period of 2020. Below is a table of the cargo operations presented by the airport during 2020 and 2021.

Toluca International Airport statistics are smaller than that of AICM, according to data published by the Federal Civil Aviation Agency, in 2020 the airport received 215,701 passengers and 134,305 passengers during 2021. Among its busiest domestic routes not only for passengers, but also cargo are Monterrey, Cancun, Guadalajara, Acapulco, and Puerto Vallarta. Below is a table of the figures for this airport. 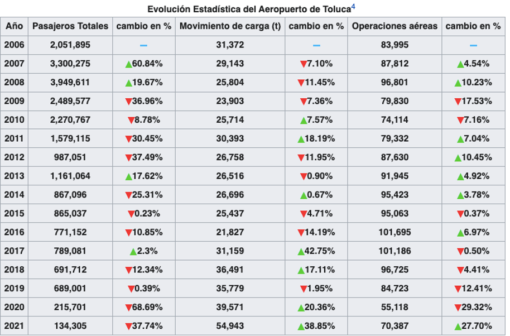 Since Felipe Angeles International Airport has just started operations in March 2022, there is no annual data available to compare the growth of its flow, however, certain data has been gathered. Currently, its routes with the highest flow are Tijuana and Cancun, where the movement of more than 50% of the total passengers is reflected; during the first 11 days of operations, AIFA moved 13,716 passengers, which gives an average of 246.9 passengers per day. “In the first 11 days of operation, AIFA received 133 operations, of which, 23 were between said airport and Cancun, while the rest of the destinations -Tijuana, Monterrey, Guadalajara, Merida and Villahermosa- had 22 operations notified to the aeronautical authority.” (El Financiero, 2022, para.4). The airlines currently operating are Aeromexico, Volaris, Viva Aerobus and the Venezuelan airline Conviasa.

As previously mentioned, the flow of both AIT and AIFA will increase, since the order has been given that 25% of the air operations of the AICM will be transferred to these two airports, which will allow greater air mobility where times will be reduced and attention will be improved, mainly for cargo operations, since it has been announced that they will have to move to AIFA. Thanks to the plans and structures of the different governmental and transportation authorities, the take-off and landing of flights from the central zone of the country is being structured in a better way to be more competitive as a country for tourists and commercial investors.